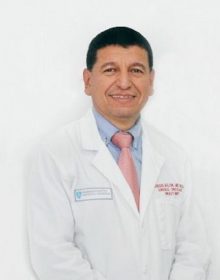 „The good doctor must treat the disease, but the great doctor treats the patient who has the disease“

Dr. Sergio Ralón is a surgery  specialist in breast diseases graduated from the University of San Carlos of Guatemala. Showing exceptional ability during his preparation stage, he became chief resident at the General Hospital after 5 years of surgical training. As a consequence of this he obtained a scholarship, which allowed him to travel to the University of Tel Aviv, Israel, and earn a specialization in cancer surgery at highly renowned Tel Aviv Medical Center. Later he moved to Rio de Janeiro, where he completed the specialty of Mastology. He also practiced oncological surgery mainly dedicated to breast diseases at Harvard University, United States.

Additionally, he’s the only Guatemalan member  of „The Society of Surgical Oncology of the United States of America“, „The American Society of Breast Surgeons“ and of „The American College of Surgeons“. To enter these famous world societies in relation to breast cancer, you must go through a very specific and careful scrutiny.

Additionally, his clinic relies on cutting edge ultrasounds to perform complicated diagnoses. This ultrasound, or high sensitivity breast elastography as doctors call it,  makes it possible to differentiate more precisely, when compared to a conventional ultrasound, between a breast cyst, a fibroadenoma or a breast cancer in patients with a mass in the breast.

Dr. Ralón’s team is highly prepared to treat bust conditions. They evaluate more than 50 patients and perform an average of 4 operations weekly, of which 50% are breast cancer. With more than 20 years working in this field, they are among the most experienced teams in Guatemala for the treatment of benign and malignant breast diseases.

Although the causes of breast cancer are not well known, Dr. Ralón has extensive experience in its treatment, being a specialist in the mastectomy procedure. A mastectomy is  the surgery where  the malignant breast tissue is removed. In addition, Dr. Sergio Ralón is especially successful in the detection and removal of „fibroadenomas“ by surgery. These are a type of noncancerous (benign) breast cyst.

Dr. Ralón is aware of the great concern that his patients have when they undergo a procedure on their breasts to cure cancer. He reassures them by stating that breast cancer is a disease that is treatable, is cured in most cases, and has a fairly high rate of control, based on his vast experience. Also, women fear for the aesthetic appearance of their body. That is why so many women trust their specific technique in the sentinel node in breast cancer and oncoplastic surgery, which he has been practicing for 23 years now, providing excellent aesthetic results.

Dr. Ralón knows that most women have a lot of confidence in their gynecologist, as their lifelong doctor, but he advises them to rely on the mastologist surgeon in the setting of a breast condition, who in his role as a breast disease specialist, can provide  a true expert and opinion.

„The best doctor is the one who best inspires the patient in the hope of a cure, relief and solution of their problems.“

Member of the College of Physicians of Guatemala.

Member Association of Surgeons of Guatemala.

Member of the International Society of Surgery.

Scholarship from the American College of Surgeons 1998, in the following hospitals:

Use of Catgut Mesh in kidney trauma 1988

Incidence and Mortality of Venous Abdominal Trauma in HGSJD 1990

Chemotherapy in patients without lymph node metastasis in Breast Cancer 1993

Aspiration versus biopsy excision biopsy in the diagnosis of Breast Cancer, 1997

Management and treatment of esophageal lesions by ingestion of caustics in the HGSJD, 1997

Evaluation of the presentation and stage of Colonic Cancer in the HGSJD, 1997

Incidence of breast nodule in patients who consult for breast pain in HGSJD, 1997

Incidence of Breast Cancer in patients consulting for Breast Nodule, 1997

Morbidity and Mortality in liver trauma in the HGSJD, 1998

Epidemiological characteristics of the patient with acute cholecystitis in HGSJD, 1999

Each patient is an example of struggle and inspiration to continue in the quest to save life. In the article published by Dr. Sergio Ralón. (October 19, 2020). „El viacrucis del cáncer de mama, su historia en Guatemala y el mundo“ Prensa Libre, explains the difficulties of diagnosing and treating breast cancer in Guatemala and how this disease can be highly treatable with a very high life expectancy if detected in time.

Request appointment with Dr. Sergio Ralón Carranza
Your request will be received and processed by the clinic staff, who will contact you soon.