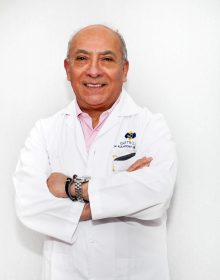 „We are dedicated to treating each patient with human warmth and prompt efficiency, providing a diagnosis that can make the difference between getting a fast treatment or an effective one“

Dr. Alejandro Hernández Monroy is a specialist in gastroenterology, having performed over 20,000 medical procedures during his career as a gastroenterologist, having a great track record since the mid-1980s. To obtain his specialty in gastroenterology and digestive endoscopy at Kobe University in Japan.

In the clinic, he regularly treats patients with gastritis, which is the inflammation of the stomach lining, and Helicobacter pylori, which is a type of bacteria that causes infections in the stomach and is one of the most common causes of peptic ulcers. These bacteria are very common in childhood and can be present in more than half of the world’s population, with most people being asymptomatic. It also treats gastric ulcers, pancreatitis, and gastroesophageal reflux.

Gastrointestinal endoscopy, which is commonly used in this specialty, is a diagnostic test that allows the doctor to view the inside of the upper digestive tract which includes the esophagus, stomach, and the first part of the small intestine. This is done using a tool called an endoscope or viewing tube. It has a very small camera attached to a long, thin tube. By inserting the endoscope through an opening or into the body’s tunnel cavities, the inside of the digestive organs can be seen and the diagnosis made with high accuracy.

It also performs colonoscopy, which allows direct observation of the inside of the large intestine, the colon, and the last portion of the small intestine. There are also occasions when it is used as a treatment, for example, for the removal of polyps in the colon.

Dr. Hernández Monroy is an expert in the early detection and treatment of cancers of the digestive system. The latter includes the pharynx (throat), mouth, stomach, esophagus, large intestine, small intestine, anus, and rectum. It also includes the liver, salivary glands, pancreas, and gallbladder, which make the enzymes and digestive juices used during digestion. Dr. Alejandro Hernández Monroy believes it is important to educate his patients, so they can learn to see the signs and symptoms of colon and rectal cancer early. This allows it to be detected early and allows patients to have more treatment options.

Dr. Hernández Monroy is the founder of GASTRO S.A., a group of six specialists, located on the eighth floor of the Multimedica Building in zone 15 of Guatemala City. They have several clinics, offices, and treatment centers with the latest endoscopic and laser technology, which allows them to treat patients with the highest worldwide standards available. Among them, they perform high resolution and magnification video endoscopy, which increases the quality of the image and at the same time allows for better characterization of the lesions. In addition, they have a pharmacy on-site, so they can ensure that patients receive the correct medications and dosage instructions.

„A doctor must be, as a person and as a physician, ethical, responsible, and experienced, so he can really help his patients.“

Professor of Internal Medicine and Gastroenterology, University of San Carlos de Guatemala, 1982 to 1988

President  of  Guatemalan Gastroenterology Association, from 1997 to 1998

Member of the Latin American Council on Irritable Bowel Syndrome, 1993

Medicine Faculty at San Carlos University from Guatemala,1968 to 1974

Gastroenterology and Digestive Endoscopy from 1978 to 1980

Request appointment with Dr. Alejandro Hernandez Monroy
Your request will be received and processed by the clinic staff, who will contact you soon.