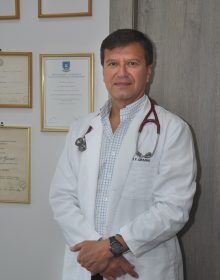 Dr. Fernando Granai is a gastroenterologist who specializes in diagnosing and treating diseases of the digestive tract. In addition to performing endoscopic gastric studies, he has extensive experience working with patients who suffer from hepatic, or liver illness.

Dr. Granai has been an honored guest speaker, respected associate and valuable participant in medical seminars and conventions around the world. By invitation of the Cleveland Clinic Foundation, World Congress of Gastroenterology, and British Society of Gastroenterology, to name a few, Dr. Granai has attended scientific meetings throughout the United States, Europe, and Latin America, for over 25 years.

From the time you first begin to suffer abdominal pain, until a surgical intervention is indicated, the gastroenterologist is your new best friend. Most patients are familiar with endoscopy, when the doctor looks down your throat to the stomach, or a colonoscopy to search for pre-cancerous polyps in the colon and lower intestines. However, there are dozens of branches, ducts, canals and systems in between that require close investigation to be sure everything is flowing smoothly.

ERCP, or endoscopic retrograde cholangiopancreatography, is a procedure used to diagnose diseases of the gallbladder, biliary system, pancreas, and liver. The test looks “upstream” into the liver, gallbladder and pancreas, where digestive fluid comes from, and follows that journey toward the intestines. During an ERCP exam, Dr. Granai would use an endoscope to identify the bile duct and feed a catheter into it to examine the inside of the digestive system and then inject a contrast agent. The fluid shows on x-rays, allowing the doctor to see the interaction between the digestive organs.

At Digastro, in zone 10 of Guatemala City, Dr. Granai offers the latest techniques and equipment to measure stiffness or fat content of the liver, for patients who suffer from chronic liver disease, hepatic fibrosis or cirrhosis. Transient elastography with the FibroScan method is rapid, accurate, non-invasive and is performed in Guatemala only at Dr. Granai’s clinic. It is a painless and risk-free alternative to liver biopsies.

Dr. Granai treats all his patients like family, that’s why he recommends that everyone with chronic gastric issues should get regular check-ups to avoid a medical emergency. The doctor says, “I like people, and that’s why they like me. It’s very rewarding to me when patients return for many years, so I know they are protected and comfortable, with the best possible attention.”

Latin American Association for the Study of the Liver – ALEH

Society of Gastroenterology, Hepatology and Gastrointestinal Endoscopy of Guatemala.

European Association for the Study of the Liver

College of Physicians and Surgeons of Guatemala

Society of Internal Medicine of Guatemala

Request appointment with Dr. Fernando Granai
Your request will be received and processed by the clinic staff, who will contact you soon.