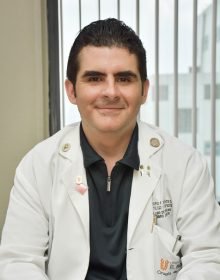 Dr. Rodrigo Bolaños evaluates and treats patients who come to his office seeking relief from the pain they are suffering because of an accident, sports injury, or degenerative illness. He is one of the premier hand surgery specialists in Guatemala, recognized for excellence in the comprehensive management of complex hand, wrist and elbow disorders, including fractures and arthritis. With many years of practical experience since his fellowship in 2009, Dr. Bolaños is now performing around 500 hand and upper extremity surgeries per year.

Dr Bolaños and his team can provide a full-spectrum of care for various conditions of orthopedic illness. At the most highly-respected Guatemala City hospitals, he is proud to work with Dr. Carlos Rayo for spinal surgery, and Dr. Marvin Aceituno, a specialist in knee injuries. To oversee the daily therapeutic needs that help patients resume regular activity, they have a physical therapist in the clinic who is dedicated to treating post-operative orthopedic surgery patients.

To assure patients of surgical quality on par with the finest hospitals in the world, Dr. Bolaños brings his own state-of-the-art surgical equipment and prosthetics, made by respected German and Swiss medical instrument manufacturers, to the operating rooms of Guatemala City. Micro-surgical hand reconstructions, shoulder arthroplasty and finger joint replacements are more durable and flexible with implants from Acumed and Depuy Synthes. Incisions and suturing are tiny, normally healing completely and correctly to give the patient almost no indication of scarring.

It’s important to Dr Bolaños that his patients understand all facets of their situation and the process required to resolve the problem. He uses tools like photos and videos in the office to illustrate what’s going on, then refers to the diagnostic images for visual confirmation that he can share it with the patients. Since Dr. Bolaños works with everyone, from little babies and young mothers to the elderly and their caretakers, he takes the time to explain like a teacher, educating in a friendly way with words and methods that make sense.

When Dr. Bolaños needs more than a physical exam to diagnose pain and trauma, he depends on the ultra-modern diagnostic imaging facilities close to his office in the Las Majadas area. X-rays can clearly show bones and fractures, but to see bones in more detail, like density or tumor growth, a CT (computer tomography) scan is required. Soft tissue in the joints and surrounding the bones is visible in minute detail on an MRI image. However, to see how the tissues interact in motion and under stress, a dynamic ultrasound gives the doctor all the information he needs to determine the right procedure to get your range of motion back to top performance level.

Dr. Bolaños says, “The patient’s best chance for complete success is when he comes to my clinic early, first thing, soon after the injury. I treat many injuries that are just correcting the work of other doctors. I may not be the first doctor they go to, but when it’s done, I’m the last one they need.”

Some upper extremity cases commonly treated by Dr. Bolaños are:

Dr. Bolaños is a delegate and Guatemala’s chairperson of the prestigious “Association for Osteosynthesis – A.O. Trauma” in Davos, Switzerland. As an honored international guest presenter in Switzerland, Dr. Bolaños prepares the educational seminars that will give young doctors the confidence to know they have the cutting-edge skills required to let them perform as well as any doctors in the world. They are an international community of orthopedic surgeons, musculoskeletal researchers, and operating room personnel dedicated to delivering knowledge, experience, and evidence to improve patient care and outcomes in the field of musculoskeletal trauma. He is also an honored guest speaker and instructor for the American Academy of Orthopedic Surgeons – AAOS, the preeminent provider of musculoskeletal education to orthopedic surgeons around the world.

Dr. Bolaños says, “Our hands are full of tiny parts in tiny spaces which need to function precisely in unison, like a Swiss clock. They are the real-life structures moving simultaneously in coordination that allow us to use external instruments.” Bi-manual dexterity is not something we think about every day, but it allows us to create the products we are proud of at our jobs, to prepare a nice meal for our family, to type the thoughts to share our opinions, and to caress our loved ones at home.

With fluent communication in Spanish, English and German, patients know that their hands are in the best hands with Dr. Rodrigo Bolaños.

American Society for Surgery of the Hand

The Recurrence of Wrist Ganglia After Open Surgical Resection

Value of Albumin Service at the Moment of Hospital Admission as a Mortality Prediction Factor in Patients Over 50 Years of Age with Hip Fracture.

Dr. Bolaños is respected guest speaker at the regional medical conferences throughout Guatemala, donating his time and talent to training young doctors. In small cities and towns, local doctors appreciated the opportunity to hear lectures and learn new techniques from Dr. Bolaños, which will increase their own knowledge and skills to better serve their patients, who are far away from city resources. He has participated in many medical missions and symposia in Esquipulas and Retalhuleu since 2014.

Request appointment with Dr. Rodrigo F. Bolanos Giron
Your request will be received and processed by the clinic staff, who will contact you soon.